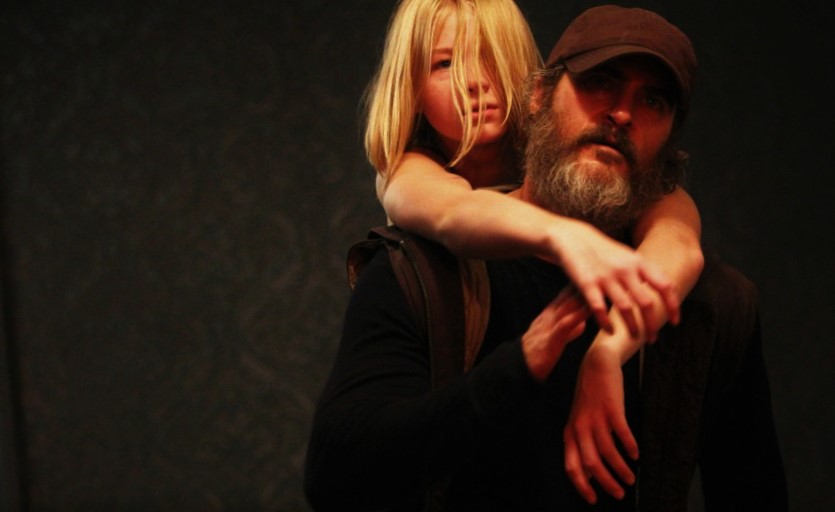 Lynne Ramsay directs a brutal but moving story of a hitman for hire – Joaquin Phoenix – who is tasked with rescuing a politician’s daughter on the down-low.

One of America’s favourite anti-hero characters: the hitman. Usually a trigger-happy, wily archetype, but not for You Were Never Really Here. Based on the short story by Jonathan Ames (no, I’ve not read it either), the hitman in this film is made real and literal.

It stands to reason that a hitman would have significant military experience and would have seen many horrific things throughout his career, and it’s all manifested in Joaquin Phoenix’s quiet performance as Joe. We see flashbacks, meltdowns and general day-to-day low points as he wades further into the murky job he takes on, all of which make him nightmarish yet understandable as a character.

While he might lose it at any moment, he can also be soft spoken. There are some undeniably sad, yet warming scenes with Joe and his mother (and another with a cat), which, in combination with the aforementioned flashbacks, colour this film in the way other hitman films do not.

Visually, Ramsay pieces together a purposefully jarring montage of Joe’s life in the first half of the film, helping you to walk in Joe’s tormented shoes, all of which is counteracted by a serene and majestic scene towards the end. Joe’s world is one full of darkened alleys, grubby stairwells, dour offices, creaking floorboards, contacts on a rolodex and voicemails left on payphones; things reminiscent of the noir genre more than the typical crime genre in which we normally see hitmen.

Darkness is not only a visual conceit, but a thematic one too, with a multitude of traumas revealed along the way. There are also moments of dark humour too, just enough to remind you that everyone in this film is a human being, even if they are monstrous – whether you find this more amusing or unsettling is something for you personally to think about.

Joaquin Phoenix plays Joe not as a chiseled, muscular hero, but a man with many issues. He’s stocky and experienced, but almost homeless looking. It’s a muted take on this familiar character type – setting aside the hammer-wielding moments – but it’s among Phoenix’s best (The Master and Inherent Vice two other Phoenix-led films worth checking out).

What can you say about the soundtrack, too? Radiohead’s Jonny Greenwood follows his recent success scoring Phantom Thread with a beautifully unnerving cacophony of sound. ‘Sandy’s Necklace’ is the kind of track which will forever bring to mind imagery from the film – and that is exactly the way you want a score to be.

Greenwood resists adding anything bombastic and doesn’t take the easy option of simply blasting together something hyperactive; this is the kind of genre which it might have been easy to phone something in for. He appears to match Ramsay’s taste for the psychotic and thereby applies just the right level of tension and disjointedness to the music.

The finale here might leave some a little flat-footed, some even lusting for something more grand. There is no catharsis in knowing all that we know; what we’re left with is that the damaged remain just that. Gun crime and mental illness is a hot topic in the U.S. right now, and while this film may not have an all-guns-blazing approach, it might make some people stop and consider the correlation a little more.

It’s a long wait now for the 2019 Oscars, but it would be a grave error to forget this film for the direction and central performance when they do.