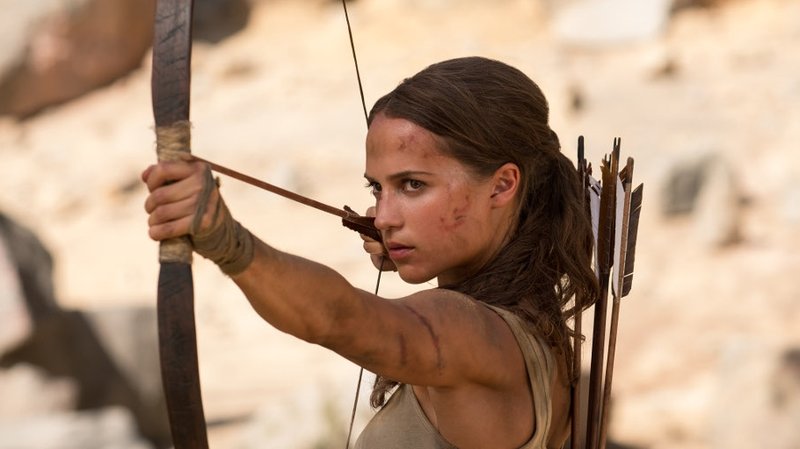 A reboot adaptation of a video game, with Alicia Vikander as Lara Croft, the primly spoken, titular tomb raider. Having seemingly lost her dad years ago, she stumbles upon a clue and sets out to find out what happened to him.

Now, I haven’t played any of the latest rebooted Tomb Raider video game series at all, but I know that this film is in keeping with the new style. The only memories I have from the original games are of tramping around Venice and locking the butler in the freezer, and the Angelina Jolie-starring is not a film anyone remembers fondly.

Going into this film with low expectations will help greatly, as will not watching the trailer. Firstly, Vikander does an excellent job of playing a wiry, intelligent protagonist, but it’s the stilted dialogue and “cut scene” moments which make you wish they hadn’t bothered. Dominic West plays Lara’s dad, cutting an unconvincing relationship – the flashbacks and backstory are ordered oddly for one thing – while Walton Goggins is the flat antagonist (check out the show Vice Principals for his best work).

Despite a lot of attempts, the studios still don’t seem to have realised that you can’t just adapt a video game into a film and expect instant success. Sure, you can have films about video games (Wreck-It Ralph, Scott Pilgrim vs. the World) but not based on them point for point. It’s no good just showing us Lara Croft; the success of the games relies on you playing as her. Watching it play out in a film leaves you detached, there is no fun in watching a two-hour long cut scene. This trend doesn’t bode well, but seems to keep sucking big name actors in.

The story behind where Lara’s dad has gone and the tomb itself is actually quite an interesting one, which is what rescues your attention, but there are also plot holes which will leave you scratching your head long after the film – like, how did the boat get back to Japan to the captain’s son?

With plenty of action, there is a sense of peril and a gritty danger, but even without having played the recent games, you know there is no way Lara Croft will die in this film. You’re left simply watching the action pan out and the set pieces don’t do anything groundbreaking visually. Indeed, the earlier scenes of Lara in London are some of the more exciting ones, and it’s nice that these scenes don’t try to set her up as the ultimate, unbeatable badass.

The film is poised for a sequel, though this will surely rest on whether the first installment does well enough at the box office. If you’re seeking a standard action-adventure to watch come Boxing Day with the familyuy70, you won’t go far wrong here, just don’t expect much else.

Vikander does her career no harm, and in fact she proves she can lead the action without being pumped up on steroids or skimpily dressed. A win for women and for film fans.