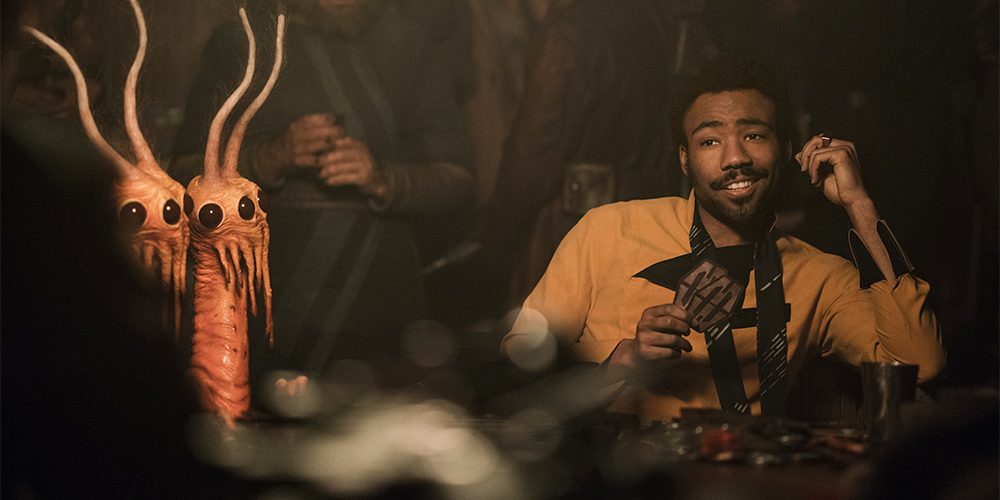 So, they went and did it. A Han Solo movie. On the basis that he was one of the most popular characters from the original trilogy, Disney have deemed it reasonable to bank on a standalone film for him. And of course, it now has to be a prequel, due to the events of The Force Awakens.

We’ve spoken, you and I, about low expectations before, and as soon as this was announced as the next standalone film, I was worried. We didn’t need a Han Solo film, because he’s already fully fleshed out. The fact that his past is as a sketchy smuggler is perfectly fine and best left to your imagination. Knowing where Han got his blaster and how he meets Chewbacca are low-hanging fruit in a universe full of possibilities for the franchise. You also can’t ignore the fact that Disney sacked off the original team to bring in Ron Howard as a “steady pair of hands”. So yes – very low expectations for this.

Not surprisingly then, I came away from this film feeling relieved, having been told Alden Ehrenreich was terrible as Han, only to find he wasn’t. The story is nicely self contained – aside from a portion at the end – and the first half of the film is extremely enjoyable as an adventurous romp. It plays a lot with Western motifs, too, with a train robbery, card games, a desert shootout and even a campfire scene. That’s where this film excels, adding new worlds and motives to the characters in it – we’re not talking Oscar-worthy stuff, just Star Wars-worthy.

Donald Glover steps up to the plate as Lando, but isn’t given a great deal to do, while Emilia Clarke and Woody Harrelson add a little charm to Han’s background. It’s no spoiler to say that Emilia Clarke plays the love interest, which is off-putting knowing that the Han-Leia story is the one true love story. All of the parts feel like they’ve been taped together – both the characters and the story – but you’ll get far more enjoyment out of it all if you’ve watched the animated TV series The Clone Wars and Rebels.

‘This film isn’t doing well at the box office, but that’s more the fault of Disney than something to read into about the film itself’

You’ve probably read that this film isn’t doing well at the box office, but that’s more the fault of Disney than something to read into about the film itself. Had it been released closer to Christmas this year, I think it would have fared better – not amazingly, but better. Instead, they release it while Avengers: Infinity War is still playing and only about a week after Deadpool 2 came out, so of course it won’t gobble up the box office (plus, does anyone else recall much advertising for this film in the UK?). Disney must have decided very early to take a bath on this one.

Rogue One benefited from being a brand new story with brand new characters, tied into the main story. Solo is the total opposite, and the one part where they try to tie into the main trilogies story feels cack-handed, but both these stand-alone films have left me feeling more fulfilled than the sequel trilogy so far. No cohesive story appears to be in place for the main trilogy, a problem which these standalones don’t suffer from quite as much.

What works for Marvel can’t work in the exact same way for Star Wars, since the expanded universe of comics and books for the latter – all created before Disney got their hands on it – has been binned. That means there is a blank canvas to play with, and if they’re brave they’ll make the most of it. Boba Fett is supposed to be getting the Logan treatment next, but it still smacks of desperation, with limited vision for what could be a great release schedule combo: one main trilogy film at Christmas every other year, and one standalone film at Christmas every alternate year. Give us a little of what we already know and then a little of something different, with a break between each so we’re not over-saturated like we are with Marvel.

I urge you to watch this film, not because it’s Star Wars, but because the story is enjoyable enough and the performances are better than you’d expect.