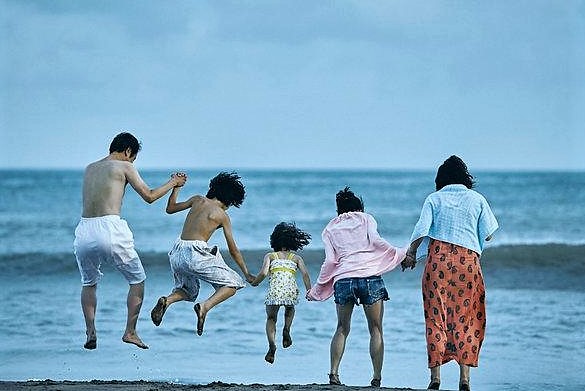 From the get-go you can tell that things in Shoplifters aren’t going to end well. Hirokazu Kore-Eda, who directed The Third Murder (reviewed earlier this year), brings the family drama genre to bear on an often unseen side of Japan: those living below the breadline.

Throughout this film we get a glimpse at how a group of people, strays in different ways, come together. It’s painted with warmth despite the cramped and fairly squalid conditions endured, and we see the family squeezing out little moments of joy from what are pretty awful situations.

The makeshift family includes a matriarch grandma played by Kirin Kiki (who sadly passed away this year), a mother and father as a couple, another young woman whose path to the family is unclear (and who works in a strip booth), a son, and a daughter. In actual fact, we learn none are related, but the father (played by Lily Franky) shoplifts with the son and this bad habit is a trait soon passed on to the five-year-old daughter.

As the film plays out, we get to know more about these characters, generally sympathising with their hardships and slowly developing an idea of how they might have come to this point. They’re humanised in this way, allowing for the shoplifting to be less shocking and more of a necessity – the father even has a motto about things in shops no actually belonging to anyone yet. It’s another motto which better sums the message of the film up though: “maybe when you choose your family, the bond is stronger”.

‘They’re humanised in this way, allowing for the shoplifting to be less shocking and more of a necessity.’

There is a beautiful shot of a train going through some sort of meadow or rice field, but this is as much nature as we see, the rest of the time scenes are either in the confines of the shack-house or by roadsides – even the trip to the beach feels washed out in colour despite the bright day. As with The Third Murder, there are an array of interview scenes, but the questioning of these characters is a more relatable, emotional and revelatory event, showing just how at odds their lives are with the normal system of things.

Here in the UK, for those who’ve never visited Japan, we often see the beautiful side of the country through pictures of the bright lights of Tokyo, the cherry blossom and landmarks like Mt Fuji. And when it comes to Japanese society, we may see stories about excessive dedication to work out of pride, or even stories of a “lost generation” of youths shutting themselves away from normal society, but nothing about what poverty, or living just to keep your head above water, is like – minute, everyday socioeconomics just aren’t on our radar.

With Shoplifters, the believable story of a mismatched, rag-tag family falling through the cracks, is an eye-opener. Two of the main characters go from working blue-collar jobs to having no jobs, resulting in an escalation of the stealing, all to be able to feed hungry mouths. It’s telling that there are few scenes where the family interact with anyone outside of their circle – these are people are forgotten to society until they become too much of a problem. A lot of the hardships on display aren’t just problems Japan has however; the little girl and her actual parents who neglect and abuse her, being one very sad example.

While this film wears depressing plot points on its sleeve, it doesn’t grind you down to a nub or constantly petition you to berate the powers-that-be. You’re simply asked to observe people who are struggling to get by, not completely forgiving all of their actions, but understanding them – understanding that, at the end of the day, these people are humans, capable of greed, but also capable of great kindness, love and generosity.