Film is a universal language, with subtle differences across the globe, but what about the cinemas themselves? In this series (hopefully) of features, I’ll try my best to give you a taste of cinemas in different countries.

Ok, ok. So Belfast isn’t exactly in a “different” country to start this series of features, but start here I will. As someone who lives in England, I’m often guilty of forgetting how connected we are to Scotland, Wales and Northern Ireland – and Northern Ireland is an interesting one. It’s quite easy to forget just how recent the violence there was, and with the prospect of Brexit looming large, most natives are only too aware of how tense things could get.

Onto the cinema then, and despite there being a few dotted here and there in the city, we opted for Queen’s Film Theatre, just opposite the majestic Queen’s University buildings.

The reason we chose this one? It was mainly down to the unassuming, elegant row of terrace houses it had been squeezed into – by which I mean, the terraced houses don’t stop to make room for this establishment. It’s hard to say just how many it actually takes up, but it blends in seamlessly with the rest of the street, aside from the painted name on plinth above the door of course. Basically, unless a stream of punters are making their way in, you might not even spot it. 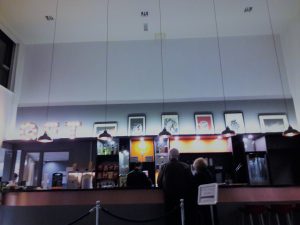 Once in, you walk down a narrow front hallway, resplendent with posters for the latest releases. The ticket booth is then on your left before opening up into larger foyer area. Here you can find a bar and a seating area. The bar has some nice movie themed artwork above it, which I suspect changes every so often. The only complaint you can have is that no one seems to know quite which side of the bar to queue – but if that isn’t the definition of a “First World problem” then I don’t know what is (plus there’s a sign!).

After grabbing some warm, sweet popcorn and a coffee, we headed into our showing of The Third Murder in screen number two (you can find the corresponding review here). Mixing their grey walls with more colourful aspects like seating and posters, the interior of the QFT is perfect for the type of audience it attracts.

I’ll be honest, I forgot to ask how many screens there were in total, or what the capacity for the screens were, but ours was a small one with what couldn’t have been more than 50 or 60 seats. From the size of the building (and the number of showings on any given day) I feel like there might have only been three screens tops. What I do remember, however, is that the building is wheelchair-friendly, so accessibility is not an issue for anyone.

The seats were relatively comfy but lacked cup holders, making the juggling of coffee and popcorn a delicate one. In many ways this is clearly no different to the independent cinemas back in England, but it’s good to support these places and acknowledge the effort they put into both their aesthetic and their programming.

My friend and I had a few drinks before making our way to Queen’s Film Theatre, and possibly picked a film which was too slow-moving, but all in all it was a nice venue and the staff were the right balance of pleasant and unassuming. We left slightly sleepy, but with a great deal of respect for this cinema. 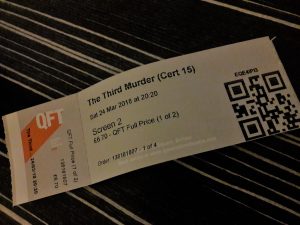 If you’re even in Belfast and fancy taking in a film, definitely head over to this place, and if you want more details than my sleepy, semi-tipsy brain can remember, just check out their website here. Additional shoutouts go to Away A Wee Walk for the hike on the cliffs at the coast and Mumbai 27 for a cracking curry.