Film is a universal language, with subtle differences across the globe, but what about the cinemas themselves? In this series (hopefully) of features, I’ll try my best to give you a taste of cinemas in different countries.

I took a little trip to Cine Doré in December last year and when we came up the hill of Calle del Olmo I almost missed it. Not because it doesn’t look glorious, but because it looks too comfortable in its surroundings. A warm peachy, red exterior means it seems to blend in with the rest of the buildings under a blue winter sky, but the Art Deco style of the columns and ornate trimmings let you know this cinema has character. This is old-world 1920s stuff. 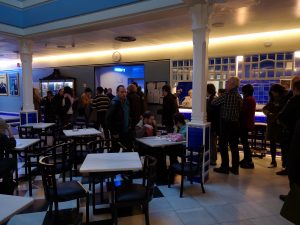 Knowing there was a Martin Scorsese season on, my travel guide-wielding friend and I decided we’d take the old Doré up on the offer of his 2006 drama The Departed. But we’d read their website all wrong. When we turned up on the Saturday the place was closed, possibly due to there being a festival of some sorts on that weekend, but also possibly because, as I say, they don’t give a damn if you want to see a film on a Saturday. Come back tomorrow.

So we did. In the morning. But it was still closed until the first film later in the afternoon (it’s important to note that, apparently, the Spanish do things much later in the day and don’t start evening dining until about 8pm at the earliest, so we shouldn’t have been surprised by this). 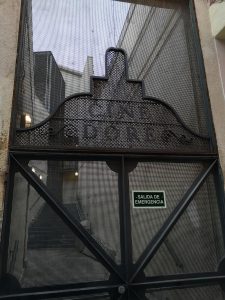 Having trekked out twice already, we figured we’d chance it later in the evening and watch the Bob Dylan: No Direction Home documentary. We turned heel and found a jazz bar to sink some drinks in and returned later to find the place slightly more abuzz.

When buying tickets you have to visit an old-style hole in the wall along the side of the building outdoors. There were two holes, and a person in each selling tickets. It felt like a very old-world European situation – something I loved. Tickets were crazily cheap at about €3 each – a steal for both the film itself and the experience of being in this cinema, so no wonder it was bustling all of a sudden.

Once inside, we made our way to the one bar which was staffed by one older woman and it looked bereft of anything to sell (one of the only criticisms). I made an attempt to order a water and a beer but this bar lady was not expecting me to have such a criminally poor grasp of Spanish language, nor was she having any truck with my second and third attempt to understand her question. Thankfully, a kind, semi-tipsy Spanish man helped bridge the translation gap and explain we couldn’t take the beer into the screen, so we settled in the lobby where an array of white tables and black chairs were set out. 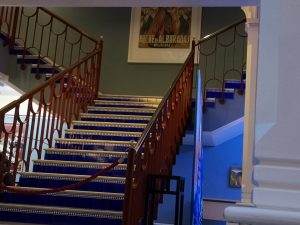 From this vantage it was hard to tell how many screens there were. I believe there were two downstairs and possibly another one upstairs but there were very few signs and the building was a lot smaller than many cinemas. The Art Deco theme carried to this spacious internal lobby, with deep blue tiling against solid white walls, making it feel more like the inside of a quaint coastal fish and chip shop than an arty cinema.

People were piling down a corridor and with no seat reservations we thought we’d better make a move sooner rather than later. The auditorium was already dark and pretty much full. We found what must have been the last two seats together over to the right and settled in. The screen itself was fairly small and there can’t have been much more than 100 seats – if that. Latecomers had to split off to find single seats. 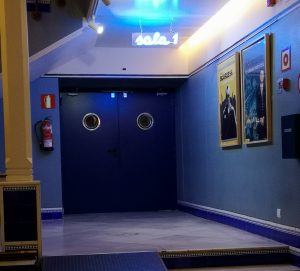 The documentary, if you’ve not seen it, has a sleepy start with the slow jangling chords of Dylan’s early stuff, and it was enough to send one man further back behind us to sleep within 15 minutes. His grumbling snore could be heard in quieter moments, much to the audible amusement of everyone else. The great thing about visiting an independent or art-house cinema is you know everyone is going to be there to watch the film, together. No mucking about. There were no phones lighting up in the pitch black darkness and no talking. The biggest reaction came when the subtitles highlighted in Spanish one of Dylan’s evasive but poetic responses to a difficult question: “you can’t be smart and in love at the same time”.

Such a long film (nearly 3 and a half hours) warranted a brief intermission, but I was never bored. Having not gotten up in the intermission personally, I really needed to use the facilities afterwards. More Art Deco touches were found in the form of black and white chess board tiling, all at a diagonal angle which made me think I might try to correct my balance while stood trying to pee and fall over. Thankfully, I did not. We made our way out with the crowds, the lobby now shut down, and took off for the jazz bar again.