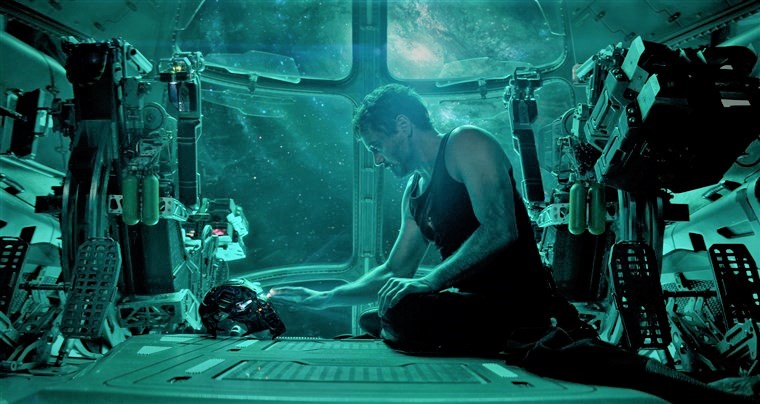 And so we come to another gigantic Avengers film, the second part of the big Marvel blow-out. Last year we had Avengers: Infinity War and we talked about how it was a long old slog, most people enjoyed it, but ultimately, Thanos clicking his fingers left hero-shaped clouds of floaty Bran Flake pieces and a lot of “what next?” questions.

All that guessing is meant to be solved here. After countless years of Marvel films, it’s all come to a head with this. It runs at almost three hours, which again, is too damn long. I won’t fire off on the subject too much, since the caveat is that there is a lot to do and many characters to get it done with. However, my screening was packed to the hilt with people grazing and rustling on snacks the entire time and that’s just far too long to spend with such people.

What about the film itself? Well, firstly, let me ask you this: how much of Infinity War really stands out for you 12 months later? For me, not a great deal, I remember enjoying watching it. There was a battle. Infinity stones. Some laughs. It’s much the same for Endgame. The big difference is, you’re waiting for the major payoff. Who will die? How will they beat Thanos? Because they obviously have to win somehow, no one is stopping this cash cow. I can say I went in looking forward to it, enjoyed it at the time, but don’t recall much about it that stood out days later. I’m not picking over the details or feeling changed in any way.

Lots of CGI and lots of intellectual property goes flying about, which is pretty fun if you’ve invested as much time in watching Marvel films as I have. But I’m not hankering to go back in for another three-hour session. Nor will I be likely to watch it more than once at home. I’ve got sympathy for the big Marvel fans; this franchise is what Star Wars is to me, so I can’t make fun of people getting overly emotional about it when I do the same at the mere hint of Leia’s Theme in a teaser trailer.

‘Strap yourselves in and just enjoy the ride as much as you can before you need to pee.’

Plenty of character development occurs here, despite the higher stakes we’re dealing with. That’s pretty divisive though, as it bulks the film out when really we could just get down to the dukes-up scenes and go all out with the action. Thor gets the most laughs but also some more emotional weight, while Captain Marvel gets to show off more of her power. This film doesn’t lean into dark or edgy, but it does throw out some emotion.

As a funny aside, you should check out Chris Evans in the excellent Bong Joon-ho directed Snowpiercer for another roll of the dice when it comes to “was Thanos right?” related musings.

Shots and editing-wise, it’s fairly easy on the eye, but again, there might be only one sublime visual piece to recall. The Russo brothers’ real achievement is getting all the characters in, getting some out, finishing the main Avengers arc and not making a complete balls-up with it (and yeah, that’s actually a pretty big achievement when you think about it).

We’re not that far away from another Marvel film already, and Captain Marvel is still showing, so if you love superhero/comic films, you’re set. If, on the other hand, you’re pretty worn out by it, then tough luck, because we’ll no doubt see the franchise setting up a new team of Avengers of the next decade. Really they should have wound everything up and tied it off completely, but this is Disney we’re talking about and nothing but constant domination will do.

Hopefully money made from these blockbusting events will get siphoned off to smaller projects though. And perhaps Marvel will continue their recent good form of giving more artistic control to directors like they did with Thor: Ragnarok. Those are the upshots. I did have a whole “art vs entertainment” argument lined up, but it’s tiresome, so I’ll sum it up with: if you like a film because it is artful, that makes it good, and if you like a film because you find it entertaining, that also makes it good. If it’s both, then you’ve got what I like to call a gem. Avengers: Endgame falls solidly into the entertaining category so strap yourselves in and just enjoy the ride as much as you can before you need to pee.